Well here it as almost the end of January and I haven’t written any posts since well before Christmas.  Mostly that is because I haven’t worked since then but now, I’m getting ready to get back in the background.

Back In The Background

To start off the year, I had a job working on Chicago Med.  I really like that show and have worked for that one a few times now.  This time, however, was the first time I had been on their set at Cinespace Studios.  All the other times I have filmed for this show have been out on location somewhere.  I’ve filmed at Rush Hospital, McCormick Place, and even Bloomingdale’s Home store.  I have been dying to see the set and was not disappointed.  So cool!  I still haven’t been on the set for the emergency room.  That is my next goal.    Had a sight of myself on camera last week when there was a big car crash scene; which I can talk about now because the episode has aired.  No one would have been able to recognize me as I was kind a dot in the background.  But hey, they pay me to be that dot. 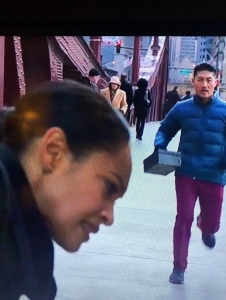 Check out this picture though.  This is my mom working on Chicago Med.  I just paused the TV to get this photo so quality isn’t great.  She is the one in the tan colored coat and hat.  Doesn’t she look just perfect?!

I am so excited to get back at it and have a job next week working on Empire.  It will be my first time working on this show.  I can’t tell you what I’m going to be doing until after the episode airs but it sounds like it is going to be super fun.

Also, Proven Innocent will begin next month and I can’t wait.  I think this is going to be a great show and have worked on it a few times.  One episode in particular will most likely have a great view of me.  If the scene makes the final cut that is.  Who knows?  Click here to see a trailer of this upcoming hit from Fox.

So I had an audition for a commercial!  I probably didn’t get it because call backs are next Monday and it’s Thursday already.  But hey, it was my first one.  Another guy and I had to pretend that we were the store clerk and the shopper.  It was fun, it really was.  Maybe I’ll have the chance to do it again and one day actually get the job.

Till next time, friends.  See you soon as I am now back in the background!

When I took some time off from teaching, I needed something to do. Something interesting. Something fun. And definitely not something ordinary. A friend told me about her work as a background actor (extra) and I thought I'd give it a try. Now, a few months later, I am starting to have experiences that I want to remember. I also want to give advice to and receive advice from others who are also in this industry. I'm still pretty new so you'll be learning along with me. View all posts by madamepatk